Think about it. When a homeowner installs an array of solar panels on their roof, they are no longer just a customer. They have become a generator of electricity. Under federal and state rules, that homeowner can sell their excess electricity back to their utility.

“The utility industry has traditionally generated electricity from large power plants, then sent that to the distribution system, and then to the consumer,” Jan says. “It’s going to be a huge transformation. We’re moving from a top-down approach to a networked model.”

The transformation that’s going on is huge because it is not just about the solar energy hobbyist, but about more people using a growing number of energy choices.

It’s a trend utility insiders call “distributed generation,” meaning electricity is getting made in different ways and places. 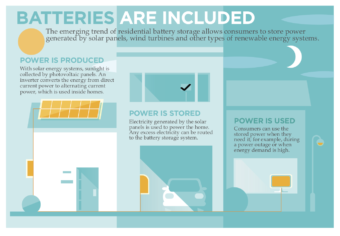 Backup generators give a homeowner the option to run a refrigerator during a power outage. A smart thermostat helps a consumer control energy use by automatically using less heating or cooling at times when nobody is home. Even electric cars can store electricity and use it in a different way at a different time.

Jan sees the trends as a new era of the industry that is “more consumer-centric.”

The new era means utilities will have to find new ways of doing business. It gives consumers more choices, but more choices mean home-owners and businesses will need the time and expertise to figure out how to get the best deal.
Jan says electric utilities are positioning themselves to help sort out the options for consumer-members in ways that benefit the surrounding community as well by connecting to the larger electricity network.

The distributed energy revolution is spreading as technology gets better and cheaper. New ideas are even changing ways of thinking about what generating electricity means. Energy efficiency can be thought of as a substitute for generating electricity, as improved lighting and appliances do the same work with less energy.

Here are a few of the trends creating the new era of distributed energy:

One of the newer forms of distributed energy comes in the form of microgrids— essentially, a miniature utility system.

A hog farm might get some of its electricity from the local utility, but it also might have its own wiring system powered by an anaerobic digester producing electricity from pig waste, a set of solar panels and a large battery.

Those interested in microgrids and others jumping on the distributed generation bandwagon can benefit by working with their electric utility, says Brian Sloboda, director of consumer solutions for NRECA.

“A commercial company could put in a battery to benefit themselves, but they’re only going to get a fraction of the benefit they could get from working with their co-op,” Brian says.

Electric utilities could help the company use its extra capacity to provide backup power to the surrounding community, with financial benefits to the company.

In an era of distributed energy, electric utilities are in a position to help consumers make the best energy decisions, Brian says.

“There are all sorts of people out there trying to sell you stuff, and they may or may not have your best interests at heart,” Brian says.

Instead of putting solar on your roof, your utility may have a community solar program you could participate in at a cheaper cost. He encourages consumers to talk to folks at their local utility before making an investment.

“They’re the electricity experts, and they’re your fellow community members,” Brian says. “They’re going to give you the most unbiased information.”