At 89, James “Jim” Johnson jokes that he has to live long enough to taste the rewards of five generations of farming: a glass of whiskey.

Wheat is plentiful at the Johnson Ranch—17 miles southeast of The Dalles, along the lower Deschutes River—thanks to the foresight of Joel C. Johnson, who settled here in 1875 and was one of the first to grow wheat east of the Cascades.

Jason, the great-great-grandson of Joel, and the youngest of Jim’s children, founded Double Circle Spirits in 2014. The first batch of vodka was produced, bottled and sold one year later, while the bourbon and whiskey—with a longer aging process—are just about ready for release.

The Double Circle Vodka is sold in 60 stores throughout Oregon. It is served in a growing list of prestigious locations, such as the Stephanie Inn at Cannon Beach and Timberline Lodge on Mount Hood. The Double Circle name and logo are a nod to the family’s cattle brand registered in 1906.

Jim and Marion married in 1951, and took over the farm from his parents, Ralph and Grace.

“When we got married, it was a medium-size farm,” Jim explains. “But now we’re the smallest operator in the county. Over the years, the smaller farms got bought up.”

The couple raised six children on the farm. Nearly all attended college. When Marion died in 2009, Jim took it hard, working out his grief from the cab of a tractor. Tending the farm improved his outlook, Jason says. A few years later, when Jason introduced the idea of making spirits, Jim brightened at the prospect of growing wheat for a new purpose.

Though his legs are often stiff and slow, and he has moved to town to be closer to medical care, Jim still works the farm. Last fall, he was seeding the next crop.

Though the spirit production consumes just a fraction of the farm’s yield, the quality of the wheat is paramount.

“Our product is different on purpose,” Jason says of his vodka.

While traditional producers work hard to eliminate the essence of the grain, he is leaving its character in place.

“Our wheat is a very good wheat, with a great aroma,” Jason says. “We keep the character, the mouthfeel and the finish.”

From the farm, the wheat is taken to Portland to be milled, distilled, bottled and sold. While many may claim the “Oregon made” label, Jason cautions that some products are just bottled, not crafted, in Oregon.

“Markedly smooth, it glides over the palate, with mild sweetness and a hint of white peppercorn heat on the fade,” noted the reviewer.

Jason is the primary salesman, marketing the spirits to liquor stores, restaurants and pubs. He is seasoned in sales, having worked at the E & J Gallo Winery for nine years, PepsiCo. for 14 years, and now with Providence Health & Services.

“I’ve always wanted to make spirits with our wheat,” Jason says. “I finally decided to chase a dream and a passion.”

Jason works Double Circle into a life that includes his wife, Beth, his two children, Bailee and Jack, and a full-time job. While Jason has created a quality drink, Double Circle Spirits is more than a shot of vodka or a tumbler of bourbon. For both father and son, this latest endeavor carries a sense of heritage and renewal.

Closer in, he points ahead. 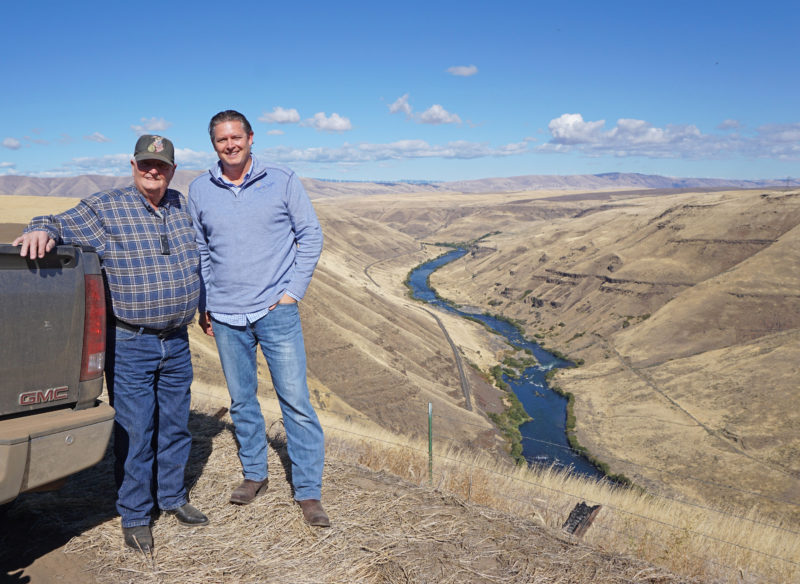