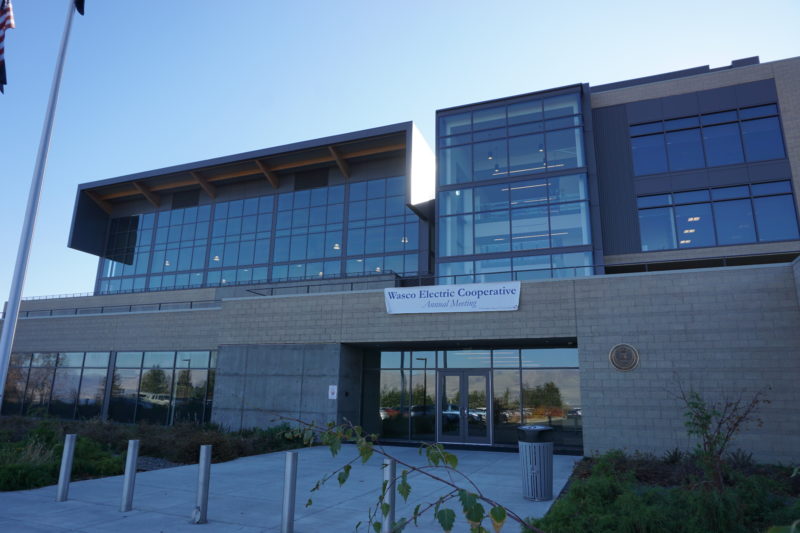 After many months, the memory of fire still burns.

“This last year has been a very trying year here in our cooperative,” Mike Collins, president of the Wasco Wasco Electric Cooperative Board of Directors, told a crowd of about 200 people gathered for the company’s 79th annual meeting in November.

While the fires wrought havoc, they brought out the best in people too, said Mike, who has served on the board for 12 years. “Neighbors helping neighbors, giving time, resources. We all stepped up in one way or another,” he said.

This year’s event was held at the Fort Dalles Readiness Center in a ballroom with sweeping views of the Columbia River and featured a lunch buffet by Cowboy Catering, music by one-man-band Ted Horwitz, a presentation from Maura Eagan Moody of Bonneville Power Administration, along with time to socialize and win prizes. The meeting is held annually to elect directors to the board and offer members an overview of the cooperative that provides power to over 4,600 services over 5,000 square miles, in five counties – Wasco, Sherman, Jefferson, Gilliam and Wheeler — with 1,612 miles of power lines and ten substations.

The “season of fires” was crushing, said Jeff Davis, Wasco Electric General Manager. “This year turned out to be the most destructive fire season in the history of the cooperative, a season that began with fires in June and continued through this fall. There were over 15 fires throughout our service area ranging in size from less than 100 acres to over 100,000 acres.”

The most significant fires, in terms of impact to the cooperative, were three fires that broke out over a two-week period in July:  Substation Fire, Long Hollow Fire, and South Valley Fire. Restoration and clean-up on the South Valley and Long Hollow fires is complete, with a few sections of lines to rebuild in the Substation Fire area.

Jeff took time to thank the many people who worked hard in the time of crisis:  Magnum Power, Sturgeon Electric, Northern Wasco PUD and Hood River Electric for providing crews; General Pacific, Anixter Inc., Wesco Distributing, McFarland Cascade, the Oser Company, Klickitat PUD and NW PUD for the rapid response in supplying materials; and the staff and crews of the cooperative. “Casey, Jim, and the crews in the field, Brewster in acquiring materials, and the office staff in communicating with our members, making arrangements for lodging of the outside crews and providing meals in the field to the crews,” he said. “These folks worked nearly around the clock throughout the restoration efforts and it was truly a heroic effort on their part.”

In addition to fire damage and recovery, the cooperative is also facing a cost increase from Bonneville Power Administration.

Bonneville has served Wasco Electric for 80 years, noted Maureen Egan Moody, a fish biologist who provided an overview of BPA’s role in the region. Created by Congress in 1937 to deliver and sell the power from Bonneville Dam, BPA is a component of the U.S. Department of Energy and operates as a nonprofit. The company markets wholesale electrical power from 31 federal hydroelectric dams in the Northwest.

With an annual budget of $240 million, BPA invests millions of dollars to make dams safer for fish, by implementing a range of actions to restore flows, habitat (tributary and estuary), passage, and support fish populations, she noted. At the same time, BPA is working to control costs. The Environment, Fish and Wildlife division, she said, “is committed to aggressive cost management.”

This is especially critical now, as a 2018 federal court decision ordered BPA to increased “spill” at eight federal dams on the lower Columbia and Snake rivers as a means to protect fish. Water spilled does not generate electricity, which may affect rates. In short, lost generation leads to lost revenue which may lead to higher cost.

BPA’s estimated lost revenue related to the spill is $40 million, she said. Though the company cut Fish and Wildlife programs for a savings of $30 million, the shortage is still $10.2 million, which has been passed on as a “spill surcharge” to customers in the region. Wasco Electric’s portion of the spill recovery cost totaled nearly $25,000.

“This cost that was absorbed by the co-op this year,” noted Jeff, “but if future spill requirements continue and BPA is not able to find additional savings to offset its lost revenue, future costs may need to be passed on as a surcharge to our rate payers.”

In brighter news, members re-elected two directors to the Wasco Electric Board of Directors: Mike Collins in District 3 and Bob Hammel in District 1; and Stacy Eakin was newly elected to District 2.

In addition, investment in community programs is strong, with members contributing $4,400 to the WECare program that provided assistance to over 30 local families in need; the community grants program funded four projects totaling $7,500; and two high school students took part in Youth Tour, an annual gathering in Washington D.C. “It’s just so cool that our cooperative could send two small town farm girls to our nation’s capitol,” Riley Brewer told the crowd.

Aside from budgets and business, the real draw for many members were the prize giveaways that included gift cards, tools, cookbooks, and more.

“It’s a good social time,” said Audrey Stephens who attends every year with her husband Terry. “We like to know what’s happening and see what the future is going to be.”