Wasco Electric Cooperative > Inside Ruralite > A Blast of a Mentor

A Blast of a Mentor 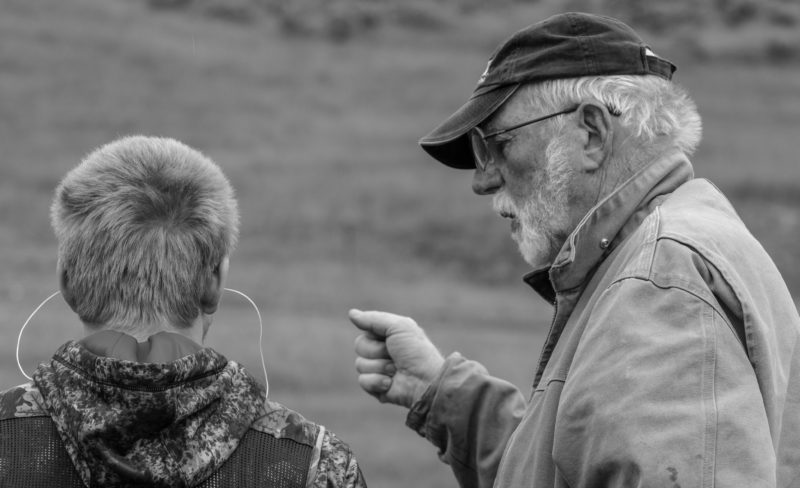 As shotgun blasts echo against the hillside in a cattle pasture south of Dufur, a grizzled man in a cap and battered canvas coat paces behind the line of teenaged shooters, occasionally stepping up to offer a piece of advice.

“Shooting is kind of whoever can stare the hardest,” explains Skip Zapffe, 80, of Pine Hollow. “You can only use your primary vision for a very short time and you have to train that. You really have to focus.”

A lifelong shooter and fish and game guide, Skip has been helping the Dufur School clay target team since it started three years ago. He not only helps the students train their vision, he can help them determine whether they have a dominant eye for shooting purposes.

During a shooting fun day the team hosts just before the state championship, he even helped Sheriff Lane Magill identify his dominant eye.

Skip grew up hunting and fishing, and ran duck clubs and sporting clay tournaments around Sequim, Washington. He also guided fishing trips on the Rogue, Salmon, Snake and Deschutes rivers.

Skip and his wife, Beverly, are retired from the guide business now, “which means we pretty much do the same thing, only no one pays us for it,” Skip says.

About 25 years ago, Skip and Beverly started shooting competitively.

“Since then, I’ve shot more than 200,000 registered sporting clay targets,” he says.

They recently traveled to the Seattle Trap and Skeet Club’s state championship.

“The kids just love Skip,” he says. “They asked me prior to the season starting, ‘Is Skip going to help us this year?’ Skip’s knowledge and skill of the sport are tremendous. We so appreciate Skip’s involvement and coaching to help our kids be much better shooters.”

While most trap teams practice at club facilities, the Dufur team has been a do-it-yourself program from the beginning. Parents and teammates haul
the thrower out into a cattle pasture. They set up a gazebo tent over some empty cable spools that stand in for tables, where parents provide a spread of pizza, burgers or sandwiches, and boxes of shotgun shells await the shooters.

“I like that it’s not super serious,” says Peyton Neal, a three-year team member.

Many of the students mesh shooting practice with other spring sports.

“It’s more of the fun and less of the stress,” Peyton says. “We’re always beating our own scores.”

“We take it seriously, but we also hang with friends and have fun,” says Alex Barrett, a first-year team member.

“That’s a good group,” Skip says of the Dufur team. “The thing we try to do most—and first off—is make them safe. Next, we have to have a good time, because to be really competitive, it takes a lot of time and practice. We don’t want them to be discouraged.”